Why do we play the way we do?  I’m speaking to most Amateurs.

When I wrote the original post, I never envisioned a Part II.  However, after playing golf today, one of my Partners, Brian, said ‘why did you ever write that post about the two nines’.  He was referring more to the bad holes, bad swings, bad chips and bad putts that creep into our game. 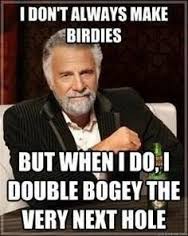 Some of us have been playing golf longer than others, but we all have been playing for more than 20 years in one form or another.  Some used to play better than today, others worse.  For me as an example, I am really playing better golf than in my younger days.   The reason is simple: I used to play sparingly.  Never enough to understand my own swing.  Now, although I am older, I developed a swing that works with my body today and I can usually figure out what I am doing differently.  Notice I said differently, not wrong.  I’m not trying to swing like a Tour Player.  Finding a swing that works for you, with your body and then trying to consistently swing that way is key to better golf.

Small things like bringing the club back to far during a back swing that it never catches up to square. Of course, sometimes it takes 2, 3, 9 or 17 holes to get it into you head and make the change.  Brian will do this.  George will get up on his toes in his swing and mess it up.  Herb will finish across his body instead of swinging through.  I have a swing thought that works for me and when I don’t have it, I usually don’t hit a good shot.  I also will get it in my head to swing hard and then top the ball and just not stay down on it.  In other words, when I’m not satisfied with my distance, I press and screw up.

All this being said, I sometimes address the ball wrong.  I am standing too close to the ball at address.  This makes me change my swing and hit a poor shot.  I’m not consistent with this miss either as it could go left, right or be fat.  Surprisingly, I can get over the ball and not feel comfortable.  I know something is wrong. What do I do?  Since my aim was to hit the ball, I swing and hit a poor shot.  I then ask myself why didn’t I stop?  Why didn’t I back away and set up again?  I can’t explain it.  It just seems that once I start I’m doomed.  I must finish.  I know I need to change this and I also know it is a mindset.  Only I can fix this.

Now take Tiger.  How many times have we seen him stop and reset before hitting.  The miracle is he can do it at any time.  I can understand having the control in your backswing, but we’ve seen Tiger stop in his downswing.  How can you have that much control both mentally and physically?  As Shakespeare would say “puzzles the will’.  I think Tiger is special.  He’s always been that little bit different.  That little bit better.  Even today, he’s working on a swing that fits his body today.  He is back playing after being out so long and having surgeries.  He’s not the Tiger of old but considering everything he’s still one hell of a golfer.  He truly could win again.  It will be harder for him.  He doesn’t have the intimidation factor anymore but who knows.  Don’t count him out yet.