Welcome to the ultimate in Frustration.

How can I play so well but only for about nine of the eighteen holes?  What does it take to play a full round, eighteen holes, without stupid mistakes?  Without lapses in concentration, missing or wrong swing thoughts.  The dreaded topped fairway wood.  The fat iron shot.  The bladed wedge.  Why?

I’m sure you all know what I mean.  I’m sure it happens to you or has happened to you in the past.  Let’s face it, we’ve seen Pros on the tour totally screw up certain holes.

I seem to be a bogey golfer, although I’ve had my index in the past be below 15.  The difference was fewer mistakes and more consistency.    I know in my case when I got my index down and was more consistent, I felt it was time to gain a little more distance.  I wasn’t satisfied.  Bad mistake!  Yet a number of years ago, I had said my end goal was to consistently shoot around 85.

Golf is such a mental game, we keep psyching ourselves out.  As I obviously did, except for some reason it’s so hard to get back to where I was.

One nine is usually somewhat better than the other, but the difference shouldn’t be drastic.  I’ve had games where the difference was 10 or 11 strokes.  It makes no sense but we say “That’s golf”.  Don’t get me wrong, I       don’t throw clubs or stay mad for more than seconds, but I do react to a bad shot.  I still enjoy the round and enjoy my friends. 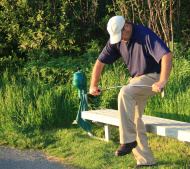 I have friends who seem to spend every spare moment at the golf course.  They are either on the range, the  putting green or the chipping area and their game has really improved.  However, even they have that bad day whereby they shoot 10+ strokes higher than ‘normal’.

That amount of practice doesn’t work for me: I’m older, achier and my body needs to rest.  Don’t get me wrong, I still try to play 3 times a week and since I don’t usually play on weekends, I have to play 2 days in a row.  That be as it may, my morning routine (every morning) includes a hot shower where I let the hot water hit all parts of my back to loosen it up.

When I get to the golf course I rarely hit balls, and if I do it’s no more than 6 maximum, usually 2 or 3 if any, which is most often.  I do always try to putt to get a feel for the green speed and and check my alignment.  My golfing partners who almost always hit balls to warm-up still have the same problem of nines.

Here is where it really gets interesting.  The bad nine holes can be on the front nine or the back nine.  They can also be on the ‘middle nine’.  Why?  If it’s on the front nine do you have to find your swing?  If on the back nine are you tired?  How do you have a good swing, lose it and then get it back?  Shakespeare would say ‘Puzzles the will’.

On occasion, rare as it may be, your swing and putting (don’t leave out putting) completely click and you really shoot a good round.  I’ve actually broken 80 twice with two 79’s.  During one of them I had two triple bogeys on par 3’s.  Water balls.  However, the rest of my game was top notch, a lot of pars and a birdie or two.  I say to myself: see you can do it!  One of the 79’s was during Senior team play, so I can’t even say a relaxing round with your normal foursome did the trick.

I feel compelled to add to this.  Yesterday I played a round of golf with my friends.  The back nine was slightly better than the front but that’s not why I bring this up.  I played mediocre but now let me describe my front nine.

I started the round with a double on the par 5 first hole.  My third shot to the island green was from the rough, I caught too much grass, and the ball went in the water.  I chipped over the water but I missed the bogey putt.  The second hole was a par 3 over water with a front pin.  It was into a cross wind so a hit an extra club.  I tagged it, hit over the green, hit a wonderful chip shot and sunk the putt for par.  On Hole 3, a long par 4, I hit an OK tee shot into the wind, a decent second shot, and blew the chip twice.  I two-putted and for a double bogey.  The next two holes were disasters with a triple and double bogey caused by poor ball striking.  I was frustrated with myself but not angry.  I felt I had my emotions in check.

I hit a good drive on Hole 6, a good second shot, a good chip and sunk the putt for par, finally.  On Hole 7, another par 3, I put my drive on the green.  I missed the birdie putt but had an easy par.  A good drive on Hole 8 put me in perfect position.  I was feeling pretty good, so naturally I pulled my pitching wedge left, it landed pin high on the left edge by the green and rolled into the bunker.  A good bunker shot led to a missed par putt and a bogey.  Hole 9 had a back pin on top of a hill.  I hit an OK drive but felt I would lay up on my second shot to give me a chance to put my third shot near the pin.  Again, with a pitching wedge, I pull the ball left into the trees and across the cart path.  Ugh!!  Fortunately, I had a low shot under and between the trees to the green.  A running 7 iron went up the right of the green into the rough but pin high.  I hit a good chip that didn’t stop in time, caught the hill, and rolled down.  A good putt back missed for a tap in double.  Again, I wasn’t angry but I was somewhat frustrated.  I hate when I miss with wedges or short irons.

The point to all this is my inconsistency gets frustrating.  Some times I have no idea why I am playing poorly and at other times I know what I am doing wrong and can’t make the correction.  I plan to cover this in another post.

Let’s face it, golf is an individual sport.  It’s you against yourself and the golf course.  However, don’t kid yourself, you always want to play well and beat your buddies (usually taking handicaps into account).  You don’t want them to play poorly, you want to play better.  That’s sportsmanship, comradeship and just pride in competition!

Does this make sense to any of you?  Does this creep into your game?

I would love some feedback on this and your thoughts as to why it happens.  Let me hear from you.