I thought I would write something a little different that you would hopefully find interesting.  I love to play golf and watch golf but that is not my only enjoyment in life and it shouldn’t be yours.

Yesterday my wife had a dental appointment which, for most people, is never fun. However, for my wife it’s down right frightening.   Our dentist is a good personal friend and fully aware that my wife is the worst patient she will face.  The office is on the peninsula, an hour to an hour and a half drive from where we live.  My wife asked if I wanted to go with her and then have dinner later. 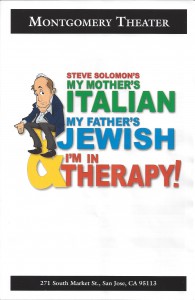 While reading the newspaper I spotted an ad for a play in San Jose.  A one-man show called “My Mother’s Italian, My Father’s Jewish & I’m in Therapy”.  I was able to get tickets and so I went with my wife, which now included dinner and a play.  I did some shopping while she was at the dentist and then picked her up.  We hit traffic going down to San Jose but I learned to drive in New York City and can deal with traffic, although I take a lot of back roads to avoid traffic.  We got to San Jose and drove to Scott’s Seafood Grill.  We parked the car and had a wonderful, leisurely dinner.  Sometimes it’s the only time we can just talk without interruption or distraction.  After dinner we walked the two blocks or so to the Montgomery Theater on Market Street.  We had never been there before and were very impressed.  It’s a small theater with good seating.  We sat in the Orchestra section, tenth row center.  The show was great.  It was really funny and most of the audience laughed heartily.  As it turns out, this was an early wedding anniversary celebration.

I just need to comment on one thing.  When I grew up, we ate as a family.  Dinner was at a certain time and the family meal included family discussion.  It was like the family dinners on the television program “Blue Bloods”.   No electronics, nobody’s face in a phone or pad.  It was a good thing and something that needs to return to society.

Oh well, that’s enough opinion for now.  Besides I have a tee time.