The other day while playing golf, my ball was sitting on the green when one of my foursome buddies chipped his ball onto the green and it landed behind mine.  In other words, my ball was between his and the hole.  For some reason I said 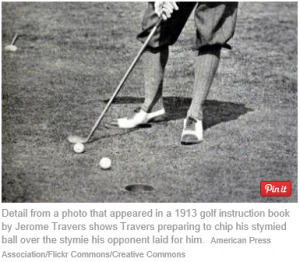 Stymie instead of my normal you can show me the way.  I got ready to mark my ball and asked him where he wanted my mark.  He asked what’s the meaning of Stymie.  I told him that in the old days of golf you didn’t mark your ball.  The ball stayed where it stopped.  If there was another ball in your way, tough luck and it was called Stymie.  You could putt around the ball or chip over the ball.  In fact, the rule was not eliminated until 1952.  That was golf.

Now comes the reason for this blog.  I wondered how many golfers were not aware of how rules of the game have changed since the original rules in 1744.  I did some research and thought I would share the information I found.  Originally there were 13 rules drawn up for the world’s first ‘open’ golf competition at Leith by the Gentlemen Golfers of Edinburgh.  This group evolved into The Honourable Company of Edinburgh Golfers.

Notice the spelling and language in the copy of the rules below.

Articles & Laws in Playing at Golf.

1. You must Tee your Ball within a Club’s length of the Hole.

2. Your Tee must be upon the Ground.

3. You are not to change the Ball which you Strike off the Tee.

4. You are not to remove Stones, Bones or any Break Club, for the sake of playing your Ball, Except upon the fair Green and that only / within a Club’s length of your Ball.

5. If your Ball comes among watter, or any wattery filth, you are at liberty to take out your Ball & bringing it behind the hazard and Teeing it, you may play it with any Club and allow your Adversary a Stroke for so getting out your Ball.

6. If your Balls be found any where touching one another, You are to lift the first Ball, till you play the last.

7. At Holling, you are to play your Ball honestly for the Hole, and not to play upon your Adversary’s Ball, notlying in your way to the Hole.

8. If you should lose your Ball, by it’s being taken up, or any other way, you are to go back to the Spot, where you struck last, & drop another Ball, And allow your adversary a Stroke for the misfortune.

9. No man at Holling his Ball, is to be allowed, to mark his way to the Hole with his Club, or anything else.

10. If a Ball be stopp’d by any Person, Horse, Dog or anything else, The Ball so stop’d must be play’d where it lyes.

11. If you draw your Club in Order to Strike, & proceed so far in the Stroke as to be e Accounted a Stroke.

12. He whose Ball lyes farthest from the Hole is obliged to play first.

13. Neither Trench, Ditch or Dyke, made for the preservation of the Links, nor the Scholar’s Holes, or the Soldier’s Lines, Shall be accounted a Hazard; But the Ball is to be taken out teed /and play’d with any Iron Club.

In 1754, the golfers of St. Andrews adopted these rules almost verbatim for their own competition, including parts of rule 13 that really applied only to the course at Leith.  This group became the Royal & Ancient Golf Club of St. Andrews.  In the 18th Century, other clubs in Britain each drew up their own rules of golf.  This somewhat came to a head at the medal competition of the Burgess club, on the 18th of July, 1807, at Bruntsfield Links.  According to Scottish golf history.org, “It concerned the ‘Stymie‘, which allowed an opponent to position their ball between your ball and the hole. Under the Leith rules you could lift the ball, much as you can today, but under the Brunonian rules, you could not and you had to play round or you risked a penalty on hitting the other ball.  The winner, Francis Braidwood, had used the Leith rules to lift an opponent’s ball and there was an objection. The initial ruling was that the match would be replayed on 1st August 1807 under the ‘Leith’ rules, but this was not the end of the matter and many members continued to object until the club virtually split into two with separate captains. The matter rumbled on until April 1809, when a reconciliation was effected, which, included the astonishing condition that all the papers and minutes of the last two years would be burnt to ensure that there was no records of the insults that had been traded. The chronicler of the Burgess records with some regret that this was diligently carried out.”

In the 19th century, more clubs recorded sets of rules.  This information can be found on Rules History website.

In 1897 the Royal & Ancient Golf Club (R&A) was given control over the Rules of Golf by common agreement of existing clubs, most of which were British.  They published the first official rules in 1899.  The US Golfing association was formed in 1894 and adopted the rules of the R&A for American Golfers in 1900.  For a little over 50 years since 1900, the R&A and the USGA operated independently.  Since 1952, they have worked cooperatively to create and maintain a Universal Code recognized around the world.

A shining example of the Stymie rule can be seen in the movie “The greatest Game Ever Played.”  The movie is the story of the 1910 US Open where American amateur Frances Quimet beat the great British golfer Harry Varden in a playoff at Brookside Country Club outside of Boston.  This movie is also in an example of how the game was played in the early 20th century and the people who played it.  The US Open was played over 2 days, 36 holes per day, rain or shine.  It’s interesting to see the golf attire and the rules of the Country Club, especially how non-members and Professional golfers were looked upon.

There have been only three United States postage stamps issued honoring golfers.  In 1981, Bobby Jones and Babe Zaharias were honored with their pictures on a stamp.  In 1988, the third stamp was issued honoring Frances Quimet.

If you enjoy golf and it’s history some other movies you might enjoy are: “The Legend of Bagger Vance”, “Tin Cup”, “Bobby Jones- Stroke of Genius”.  Each of these movies tells a golf story.  I can’t attest to the accuracy of the actual events, but the stories are good and the background of the times is always interesting, with a lot of truth.

There are also books of these and other events if you might enjoy reading.  I have some suggestions in the links below.